What to look out for when choosing the best stretch film for the job?

1. Standard or High Performance
This is by far the most important decision. Most decisions will be based on price, but will need to be adjusted based on job requirements. Not long ago, before the advent of High Performance Shrink Film, gauge (thickness) was pretty much the only factor that mattered. Now, this is just one of many considerations.
Standard/true-gauge stretch films provide a great deal of stretch, tear resistance and strength. The main disadvantage is waste, as it is impossible for the average worker to apply enough force to reach the maximum stretch potential of the film.
Economy/micron stretch film is one step below true gauge stretch film, typically 57, 60 or 63 gauge. The main difference is the thickness and the amount of tensile potential. It is generally stiffer and does not stretch as well as true gauge film. On the other hand, it is stronger, more affordable, and produces less waste.
2. Blown film or cast film
There are two basic methods for the manufacture of stretch film - blow molding and casting. The manufacturing process determines the properties of the film.
Blown film is manufactured using a blown film extrusion process. The resin melts, blowing a giant bubble and air cooling. This is a slower (and more expensive) process, but yields higher quality. Features: Superior strength, stretch, film memory and puncture resistance; but poor clarity and loud noise when relaxing. It has super strength to adapt to irregular loads.
Cast films are manufactured using a cast extrusion process. The film is not cooled by air, but by cooling rolls. This makes the cooling process faster and the product cheaper, but is inferior to blow molding in important aspects, including strength and stretch. Typical characteristics of cast stretch films are: clarity, high gloss, quiet unwind, consistent adhesion and consistent film thickness.
3. Standard or pre-stretched
The pre-stretched film is stretched at the factory to near its final breaking point and then wound onto a roll. This means that the film does not require as much physical energy to apply as standard stretched films. This is the main reason for the popularity of pre-stretched films in manual packaging. In fact, hand-applied pre-stretched films can yield the same load stability as machine-applied. The spool is also light and easy to handle, and can be applied using the forward wrap technique, which helps prevent slip and fall incidents. Basically, the user gets the same (or better) load stability with less product, less energy, and better control.
While pre-stretched film is more expensive per foot than traditional film, it requires about half the amount of film, which results in net cost savings (the film is lighter and therefore cheaper per pound). Another advantage is that the pre-stretched film will naturally tighten after use. This unique film memory and its tendency to tighten after application is the most important reason for pre-stretched films.
Polyolefin shrink film JT01 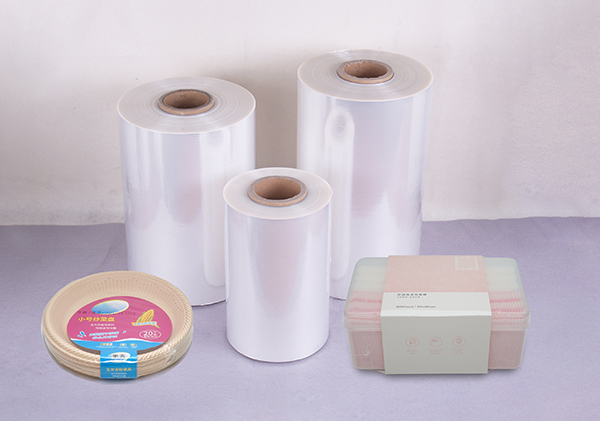